This coming week’s storytime is going to be all about the letter “H”.  I made a flannel to share based on the book The Napping House by Audrey Wood.  I got the template off of Kizclub.com.  If you have not yet familiar with that site, go check it out!  You can print off templates in black and white or color.  Either print and laminate the pieces or use the shapes to create the story in flannel.

The Napping House is a funny and cumulative tale similar to the rhyme “This Is the House That Jack Built”.  A Granny, a child, a dog, cat, and mouse are sleeping until…a flea wakes everyone up!

To create the flannel I glued the “sleeping” pieces on one side and the “awake” pieces on the other.  As I tell the story I plan on putting the sleeping pieces up one at a time.  As the characters wake up all I have to do is flip the pieces over and Surprise!  I am hoping for at least a few laughs!

At first everyone is sleeping…

Here are a couple of pictures of the two sides of the flannel pieces.

For my Mice themed story time I flannelized the book Mouse Paint by Ellen Stoll Walsh and made it into a box story.  Well, actually I made the pieces out of foam which worked nicely on the box as the pieces were sturdy and durable!

Mouse Paint is a story about three white mice who hide on white paper so the cat can’t find them.

The mice find three jars of paint.  They have some fun, jump into the paint and change colors!

They have even more fun when the paint spills and they jump into the puddles.   Their feet change different colors!

The paint gets a little sticky so they wash themselves off in the cat’s bowl while he is sleeping.

The mice decide that painting on paper is much better than painting themselves.  They paint the white paper all different colors…But, they leave a part of the paper white so the cat still can’t find them when he comes sniffing around!

This was such a fun story to tell!  The best part was after I “dunked” the mice into the paint jars and they changed colors…one of the girls kept asking how I did that and of course, I answered…Magic!

I covered a box in white paper to create a background for the mice.  I kept the pieces in the box and as I told the story I pulled the pieces out.  Removable glue dots work nicely or you can tape the pieces ahead of time.

The template I used can be found on Kidzclub.com.  Check out the website for many other story board templates and ideas.  It is a fantastic resource! 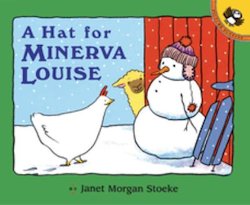 Silly Minerva Louise!  The other chickens hate snowy mornings, but Minerva Louise looks at a snowy day as an adventure.  But, this silly hen needs something to keep her warm.  Wait until you see what she finds!

It was a beautiful snowy day and Minerva Louise couldn’t wait to go out exploring.  She wanted to stay out all day, but it was too cold.  So Minerva Louise went to find something warm.  She thought a scarf might help so she went exploring in the shed where she found a…

Garden Hose! But, it was too big to be a good scarf.

Work Gloves!  But, they were too big, too.

Minerva Louise thought what would keep her really warm would be a hat.  That’s just what she needed.  So she found a…

Flower Pot!  But, that didn’t work well for a hat.

Boot!  But, that didn’t work either.  It was too heavy.

Beautiful Snowman with a wonderful hat!

She looked around the snowman for another hat and found…

A hat!  It was a mitten, but silly Minerva Louise didn’t know that!

And, when she looked around, she found…

Another hat!  Which was just fine with Minerva Louise.

GO TO BED, MONSTER!  by Natasha Wing tells the story about Lucy, a little girl who could not…would not…DID NOT…want to go to sleep.  Instead she wanted to draw.  But, when she picked up her crayons and drew some shapes, she created…a monster!  The funny thing is that monster did not want to go to sleep either.

I love this book, but it was hard to read with a large group because the pictures are a bit small to see from the back of the room.

So…I flannelized it!
I drew the pieces, colored them with crayon just as Lucy had done and then laminated everything.  I stuck with the main pieces of the story and left out others, mainly because of lack of time that week.  When I told the story, I actually pretended that I was Lucy!
The monster wants to play so they fly airplanes (that was a prop).  When the monster is hungry, Lucy draws a pile of meatballs.  When he is thirsty, she draw him a bucket of water–glub, glub!  He gets scared so Lucy draws a huggy bear.  When it is too dark, she draws him a moon.  He still won’t go to bed, so she reads him a book.  Finally the monster and Lucy are sleepy so they both climb into bed and go to sleep!  I used a piece of material to cover him up. Cute story that works great with many different themes!

Today we read books about Owls and it was a Whoot!

Opening Ritual:  “If You’re Happy And You Know It”
*Sallie (the most wonderful volunteer!) helped greet the kids with a beautiful white owl puppet.

Book:  A Book of Sleep by Il Sung Na

An adorable book that the kids really enjoyed.  An owl flies through the night and discovers all the ways different animals sleep.  Loved the way the owl is on every page!

Get the Wiggles Out: Raffi’s “Shake Your Sillies Out”
Gets the wiggles out every time!

Cute story–the kids liked pretending they were the animals saying Hello, Day!  And, then of course, at the end they were owls saying Goodnight…

Song/Activity:  Owl In the Tree
Handed out owl stick puppets to the kids.  When the music played, we pretended it was night time and flew the owls around.  When I stopped the music, we pretended it was day (well, it actually was!) and we made our owls go to sleep.  And, so on…This was a great “freeze” song and the kids liked playing with the owls.  I did not play the entire song, just went until I thought the kids were ready to move onto another activity.  In order to get the owls back so I could use them another day…I took out a brown box and said it was a tree for the owls to go to sleep in.  Amazingly enough the kids all were very excited to be able to put their owls back in the tree!  Nobody cried about letting go of their owl and all were received back intact!

Fran’s Flower by Lisa Bruce is a delightful book that teaches children about plant growth and patience.  It can be used for themes such as Growing Things, Flowers, Gardens, etc.  I read the book aloud and used the clip art, flowerpot and flowers as props.  But, this story can also be told as a flannel board using the clip art and adding in puppets to act as Fran and her dog.  Hope you enjoy!

In this adorable book a little girl named Fran finds a flowerpot filled with soil and a tiny green sprout, and decides she is going to make it grow.  Fran decides to feed the sprout everything she likes to eat…things like pizza, ice cream, and maybe even a cheeseburger!   Of course, the sprout does not grow, but when Fran decides to throw the flowerpot out the back door, Mother Nature takes over and the sprout grows into a beautiful surprise for Fran…a flower!

I printed out clip art to illustrate the different foods Fran feeds her tiny sprout.  I used a flowerpot/vase to put each food item in as I read the book, and boy did that bring some laughs!  When Fran throws the sprout out, I moved the flowerpot/vase behind my flannel board.  Then we acted out the sun coming out and the rain coming down.

Flowers bloom after the sun and rain!

And, of course at the end of the book, I brought out the flowerpot/vase again, but this time with flowers inside it–the kids were so into the story they thought it was magic!